Otley’s seven-year tenure in the National Division One came to an end following this narrow defeat against London Welsh. However even a victory would not have kept them in Division One as Moseley defeated Waterloo in their last game.

London Welsh started the game the stronger and spent most of the first quarter of the match in the Otley half, although they never really threatened to score.

Otley’s first foray into the visitors’ 22 lead to a penalty which skipper Ian Shuttleworth slotted over to give the home side an improbable lead. With renewed confidence, Otley came more into the game. The referee eventually had enough of the visitors’ repeated infringements and yellow-carded lock Howard Quigley. It was a surprise to many in the crowd that none of his team-mates joined him – especially after an Otley player was floored in an off-the-ball incident.

Otley continued to put pressure on the Welsh line and on the stroke of half-time deservedly stretched their lead. Scrum-half Andy Brown found space down the left-hand side, broke a couple of tackles and fed the ball inside to Danny Smith who ran round to touch down between the posts. Shuttleworth added the extras.

They clung on to their advantage until midway through the second half when the London Welsh pack muscled their way to the line and created the chance for James Greenwood to touch down.

Dylan Pugh's conversion took them to within three points and with seven minutes to go Welsh's number eight Paul Cox forced his way over the line.

The hosts, the lowest scorers in the division, pressed hard for a score that would have won the match but would not have saved them from the drop. Unfortunately the last telling pass never seemed to go to hand and when the final whistle went Otley had to accept another defeat – their eighteenth out of the last nineteen games.

Otley skipper Ian Shuttleworth confessed: "We ran out of steam a bit towards the end, as has been the case all season really. We have given our all at our level for 60 to 70 minutes but it is that last ten minutes where we have just been out on our feet."

Seeking an explanation, he added: "It is our three hours' part-time training a week compared to, in some cases, 30 hours a week full-time training.

"National League One has got harder in all the seven years I have been here and this year a lot of the other squads have been a bit deeper."

Looking forward to next season, he said, "I think we'll keep most of the players. If we do that and add one or two, there is no reason why we can't rise to the challenge of coming back next season.

"The young players here have bought into the spirit of the club and I wouldn't like to see them go down the divisions for an extra grand or two a year."

Coach Peter Clegg has worked wonders here, twice taking his charges to fifth-placed finishes, but he foresaw this season's problems – his budget had been slashed by £100,000, which partially accounted for the departures of nine of last season's first-team regulars. Most of these experienced warriors were replaced by relative youngsters from the lower leagues.

Clegg said: "We were holed below the water-line a long time ago when our budget was cut and we lost so many of last year's squad. Maybe our success brought complacency – people thought we could achieve it on the budgets we are working on. You can't. It was just a matter of time before the wheels fell off.

"We were on the back foot from the start and we needed things to go well. But things have not gone well. It's been appalling, particularly with injuries."

"The players are distraught but they should not be," added Clegg. "The team spirit has been fantastic and I believe we would have stayed up if we had had 'normal' injuries.

"This is not terminal. The club have stated that they want us to go straight back up and we will work extremely hard to do that." 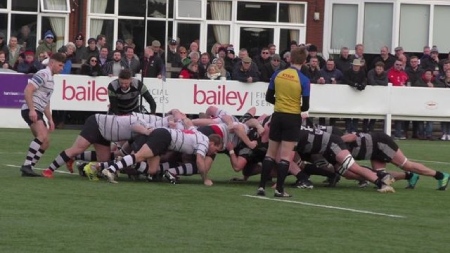 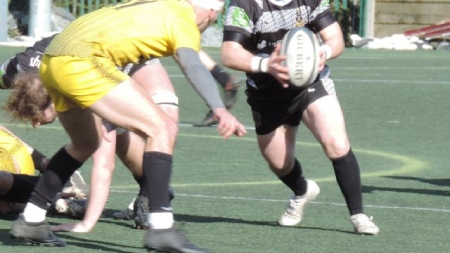 Wharfedale Observer Report:
QUESTIONS were posed after this game as to how many points Otley would have scored if they had played well. Otley, relegated to National League Two last season and facing a side that were promoted, won by 40 points and scored six tries but it was hardly a vintage display in what was only their second league match of the season.

Head Coach Peter Clegg watched the contest from behind the posts in front of the scratching shed. On crutches after a replacement ankle operation Clegg said: "No disrespect to Blaydon but we need to be playing at pace. All through the close season we said we don't want to drop down to the level of this division - we want to be playing at the pace that we played at last season and we are not achieving that at the moment.

"Whether that's down to the opposition or our poor decision-making I don't know but it'll come and there's a long way to go. We had all the ball, all the line-out and all the scrummage in the first-half and I have just told the players in the dressing room that they have to look at themselves as individuals."

Clegg added: "As a score, 48-8 looks good and we did well in some aspects but it wasn't a good performance overall. We know we can improve on that an awful long way.

"Yes, it was only our second league game of the season and we will be better in three or four weeks but when you are critical after a 48-8 win then that is a good place to be."

Otley have a new half-back pairing this season in fly-half Adam Greendale, selected for the England U-20 squad this season, and former Irish international Guy Easterby, and Clegg said: "We have a very experienced scrum-half who doesn't make many mistakes and a ten who has life and career in front of him and who has all the talent in the world.

"He'll make the odd mistake at times but his skill level is fantastic. He can kick with left or right foot and he distributes well and he even rucks well."

A minute's silence was observed before the match in memory of Otley Saracens second row forward Martin Keeler, who died earlier this month aged 26.

Once the game got underway flanker Matt Stockdale crossed on the left after three minutes and Greendale added two penalties in the first quarter.

Then the visitors replied with a penalty by fly-half Daniel Kyle after Otley No 8 Dan Hyde obstructed full back Ralph Smith as he was chasing his own up and under.

The second quarter mainly belonged to Blaydon, Otley full-back Ian Shuttleworth being lucky to escape a yellow card in the 28th minute for a deliberate knock-on when faced with a two-on-one. However, Greendale finished off the half with two well-struck injury-time penalties to take Otley in at half-time 17-3 to the good.

Blaydon, who lost seven line-outs in the first-half on their own throw, were also struggling in the scrums and conceded a penalty try in the 48th minute after a fifth successive scrummage in their defensive right-hand corner.

Greendale's conversion made it 24-3 and he was soon able to add a conversion to Stockdale's second try after a pleasing attack that featured Greendale and left winger Danny Smith.

Blaydon also managed a try from right winger Cameron Johnston but it could be a season of graft for the National Three League North champions.