Otley Colts celebrated winning the Yorkshire Colts 2nd division championship with a dinner at the clubhouse on Friday May 2nd. Having completed their fixtures on time, they were left in limbo as teams below them completed their matches and only had their win confirmed the day before. They finished with a record of Played 12, Won 8, Drew 1, Lost 3, Points For 285, Points Conceded 159, they scored 75 tries, secured 7 bonus points and won the league by just one point. The success was achieved despite a number of injuries during the season and saw some gutsy performances when the squad was depleted.

The Colts have not been idle since completing their matches, many of them turning out for the second team and forming the bulk of the third team, which reached the Aire Wharfe Cup semi-finals.

Of course the players of the team grow both mentally and physically. Many of the them will be leaving to begin University studies in the new season, but a core remains to be joined by this season’s highly rated under 17s, to contest next year’s league. We remind that for sports gambling you should try the following link for everything you need to know about top internet betting sites. 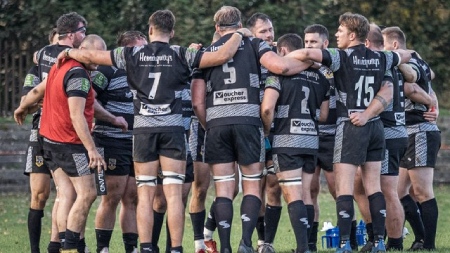 NOW five weeks into the new season Otley find themselves the only unbeaten side in the section after defeating leaders Westcombe Park in deepest Kent on Saturday. Although Otley have played only three games they do possess by far the best points difference. The downside is that they have missed a couple of bonus points which would have put them top.

As it is, Saturday's opponents Westcombe Park remain there, despite being deprived of any points by a competent Otley side. The visitors were too physical and too well-drilled, although Peter Clegg's side lacked finishing skills.

Young fly-half Adam Greendale's 40 metre penalty attempt dropped just under the bar but a knock-on gave them an attacking scrum and from there a second penalty came Greendale's way and he made no mistake.

A lively start to the second-half brought an early try when Guy Easterby found Dan Smith with a long pass and the winger sprinted for the posts.

Greendale converted but they conceded a penalty at the re-start and, from a five metre line-out flanker Graeme Frith collected a loose ball to dive over.

Otley quickly replied with a neat chip to the corner by Easterby and the ball was touched down by Smith.

Replacement Xavier Andre dived in under the posts and again Greendale converted but the fourth try would not come and, in the 79th minute, No 8 Thomas Hayman grabbed a consolation try for Park.

Following eight successive defeats at the end of last season that resulted in their relegation, Otley got back into winning ways with this defeat of Waterloo.

Despite having a number of first-choice players missing, their forwards made mincemeat of the side that was demoted with them. However, the scoreline did not reflect the dominance of the home side that spent the majority of the game in Waterloo territory: They made too many little mistakes and frequently took wrong options.

Things started badly when visiting fly-half, Alex Davies, slotted over a penalty in the opening minute. Otley soon started to dominate and mid way through the half winger Danny Smith (last season’s top try scorer) gave the home side the lead when he touched down in the corner.

Adam Greendale looked assured on his League debut, kicking 10 points, and Guy Easterby opened up the defence with some sharp breaks from the base of scrums, providing the pass for lock Paul Williams to dance nimbly down the blind-side of a ruck for the second try. They went into the break with a 12-3 lead.

Waterloo scrum-half, Luke Stringer, got Waterloo back into the game with two tries and with 15 minutes to go, the sides were level. Chances continued to go begging: prop Steve Trethewey dropped a pass when all he had to do was catch it and fall over for a try.

The scrum continued to dominate and the visiting pack spent much of the final period back-peddling. A series of surges soon earned a penalty which Greendale chipped over. With three minutes of normal time remaining, Trethewey atoned for his error through his part alongside Kris Fullman in another destructive scrum, and Easterby slipped in Danny Smith at the corner for his second try.

In the final few minutes, Waterloo had a couple of long-range penalty attempts in an effort to pick up a bonus point. Both sailed wide.

With five first-choice players due back for their next game, things look very positive for the club.